No, No and a big No, is generally my answer to any invitation which requires me to step outside city. It’s not like, I don’t like travelling, I do, but I have a packing and unpacking phobia which haunts me for days before/after travel actually happens. Also this means I have to send my dog to his hostel which most of the times ends in a frequent vet visits after I return from the journey.

But this time my sister was keen on taking a mental break, and she convinced me this time by repeating her usual tantrums like “just look at you”, “you need a change”, “you really deserve such trip”, and person like me will feel “oh poor me! yes really I deserve this” 🙂

In my family travels rarely get planned in advance, because most of the times it gets cancelled for one or other reasons. So we are a bit spontaneous, plan journeys on just a day or two before and we just take off and then struggle with bookings and all. But this time we planned everything at least a week before.

First thing we did this time, is to get a confirmed hotel booking. Believe me its a very tedious job to select a hotel in an unfamiliar territory. My sister would insist me reading all the good and bad reviews and finally get influenced by the bad reviews and then give up on that hotel and look out for another.

Finally I found a good enough resort named, “Prainha resort by the sea”.  It was located just next to the famous Dona Paula beach. Yes the same one where few action sequence of Singham movies had been shot. Who wants to fight at such a beautiful place, but never mind 🙂 We selected this resort as it was next to the beach and also has its own private beach. We got a good deal on booking for 3Nights/4Days for a sea facing room.

Next thing we did is to book train tickets. It was a festival time, and however it’s a off season period, nothing in India actually gets off on festivals. We got return tickets confirmed, but were put on waiting list from our departing station Ahmedabad. But we managed to get Tatkal tickets on 4th September and we were about to leave next Day.

Next day the first thing to do in the morning was to drop Bansi in the Dog hostel. I reached the hostel where a guy was already waiting for Bansi’s arrival. Bansi didn’t even bother about the changed hands and didn’t look at me as I was hoping to wish him a goodbye. He started sniffing and was happy to be at new place for a while. Poor boy unaware of days to come 🙂 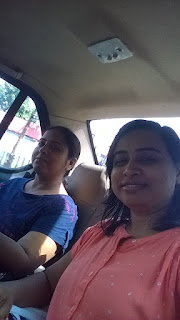 Now everything has been set on place and we were good to start the journey. Reached railway station and got into the train. We had only a printout of the Tatkal ticket as it has been booked by my brother from other city Baroda. But Ticket Checker wanted us to have the actual ticket and we had to call my brother to bring the ticket at Baroda railway station. He appeared with ticket and some famous city snacks for us. Love you Bro

Train was running behind the time so we reached Goa a few hours late. But it was okay as it was still 9 am and our checkin time was 12pm. It was Thivim station and we hired a cab to reach our resort which was still about 35 kms away. Cab service there is a pre-paid service, so you pay a fixed price before hand and there is no worry that cab driver will take you from longer routes.We reached Dona Paula (In the left Image), checked in and got into the room after finishing some formalities.

As promised we got a neat and well made room with a sea view, but to our surprise there was something more to the view – The coconut view, which was making it hard to get  complete sea view :). But to our surprise the manager arranged another room with a more closer sea view from the next day. So it felt perfect! One could easily hear the wave crash even being in the room and the whole room was feeling that vibrations loud. Room was so cooler with fresh air. 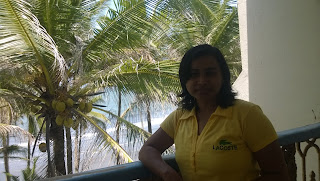 We headed to the restaurant area as it was almost lunch time but we changed the direction as soon as we saw the sea much closer. We went up to the boundary wall and preferred to sit there and hear wave crash. 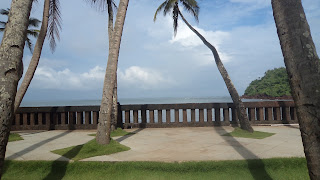 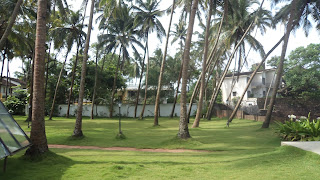 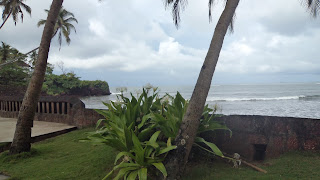 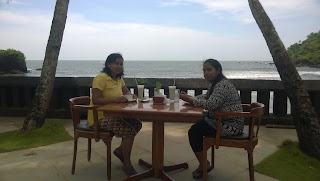 Restaurant staff arranged a table by the sea and we had our long due lunch containing Soup, Roti, MixVeg and Buttermilk. A vegetarian like us really does not have much choice as soon as we step outside Gujarat. Never mind, Goa is more famous for Feni and sea-food and not vegetables :). I see sea as a home place for some animals but, don’t know why people call it as sea-food. I wished a lot in my heart to get a glimpse of a Water horse and ride a few waves there as shown in the movie but all in vain. 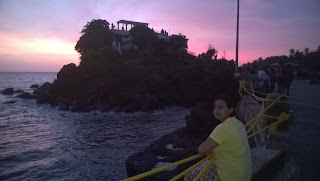 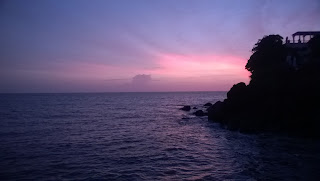 In the evening we went to the near by Dona Paula beach, and enjoyed the sun setting gradually.
At beach there was nothing more to do as only water sport available was Jet ski as other sports were banned during monsoon and with this news our plans for scuba diving and para gliding just evaporated in front of our eyes 🙁 But we were okay, and balanced with Jet ski only 🙁

After dinner I ordered a coconut Feni as I wanted to experiment one of my dreams in which I saw myself drinking alcohol. So there won’t be any good place other than Goa to try this. The restaurant guy helped selecting the drink as I was a novice. He came with 30 ml Feni with a big flask of Limca. I told him about the proportion, but he left that on me. I filled the glass up to the full, as aroma of Feni was not at all appealing but I wanted to toast for my late father as well. I drank the full drink by making bad faces and drank the leftover of the Limca to get over Feni’s taste and smell. I had called my family in Gujarat before ordering Feni, brother was a bit in shock and told me to ask my mother when I asked what drink to try. My mother gave me a very chilled sarcastic response to try Rum as she has read somewhere that it can bring your cracked mind on track 😉 My Parents have always given us total freedom and it was the reason we never had to hide anything from them.

Next day was my sister’s birthday, and the resort was the best place to celebrate it. We roamed here and there and spent the whole evening inside the resort beach area. We didn’t want to come out of the sea until some crabs started biting our legs, so we had to. In the evening we had a simple meal and spent some more time by the sea as sound of her wave crash were giving us a feeling of contentment. 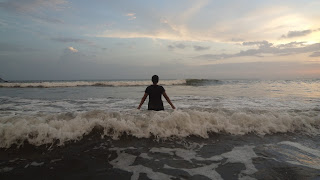 We had now just a day more to spend in the Goa, and we wanted it to utilize fully. In Goa one can
easily hire a scooter or a cab to self drive for a day and return the same next morning, and that’s what we did. We got a scooter and we left to see other beaches. 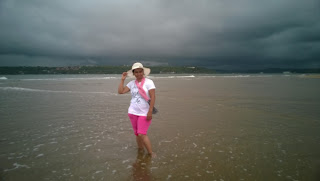 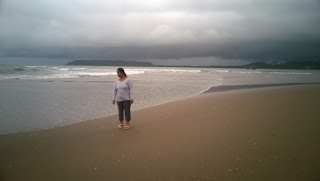 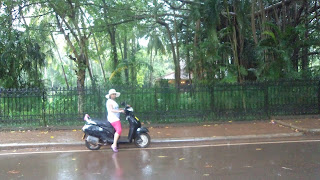 We reached “Miramar” beach in Panaji,spent some time there until it started raining. It was raining heavy, but we didn’t have another day so we didn’t wait and drove straight to explore other beaches of North Goa.

We reached “Calangute” beach while enjoying driving by lush greenery under the heavy rain. But due
to heavy rain, an alert has been released for public not to go near sea waves and so safeguards there,

didn’t allow anyone of us to even stand closer to the sea. We realised that other popular beaches might have the same alert and it would be in vain to travel there. So we left the plan to drive to the next beach in the same stretch and we drove in the opposite direction to visit another famous beach called “Candolim”.

But we missed just one turn and drove to the straight just to find ourselves at the lonely beach called
“Sinquerim”. A few famous resorts are located there like “Taj Vivanta”. Due to rain we could not

take pictures but sea level seemed up than normal and the whole sea was just looking like a heaven calling you for a ride. I don’t know but I feel very content and complete when I am at sea and all I want is to walk on the sea even if it means sinking inside. I can die there happily. The water here was clear but would bring lot of sand along with waves. We spent few hours there and went back to Miramar beach as sun was about to set and that beach is just a few kms away from our resort. 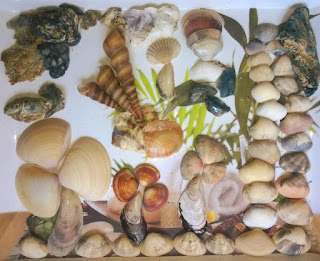 I collected many shells from there for my niece as she likes them just like me. When it was about to dark we went to resort. In the late evening we again went outside to try local veg restaurant, and we found one named “Forest – Veg Food”. Had nothing but khichadi and Lassi there as we wanted light food. It was almost 10 when we returned to the resort .

There was one shop just outside the resort where I used to go to drink tea. There I used to get a very good tea and a lady who runs the shop would give us some local information meanwhile. So it was fun. I owed her 5 Rupees as she didn’t have change that day and she told me to give it on the next day. But we didn’t go the other day and we were about to leave the next day.

I went there after packing everything to return her 5 Rupees. She and her husband was quite surprised and smiled seeing me returned just to pay money back. But they didn’t have change today also and nor do I. So after much effort to balance 10 Rupee note, her husband came with a pack of Orbit gum which costs 5 Rupee amount and said that I don’t have a choice, but to give you this. I accepted but with this, he also offered a free Perk chocolate bar which I accepted after a much hesitancy. 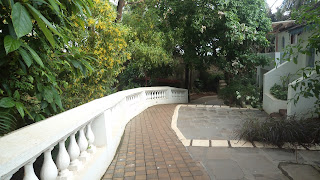 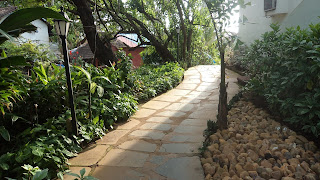 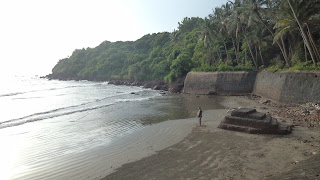 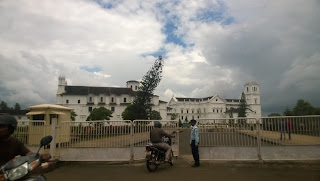 It was almost time to say good bye to the resort and Dona Paula beach, but we made sure to have a enough dose of the sea view and got in to the cab after saying thanks to the hotel staff for their good service. On a ride to the railway station we got a glimpse of the old church which we could not manage to visit. Reached to Karmali railway station to catch the train. Fortunately one of the train coaches was vacant and we could select whatever seat we liked after Ticket checker assure us. We landed to Baroda the other morning and reached to Brother’s place to have another restful weekend, also I made him view all the photos and listen to all the nonsense things we did in the Goa.

That’s all for now 😉