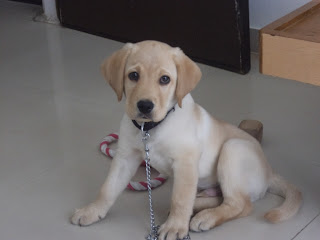 Last month, after so many crocodile tears I succeeded in convincing my family to gift me Labrador puppy as a birthday gift. Though a little late I got the gift.

We had owned 2 dogs in the past who are no more. My last dog died in April 2008, so I was excited to get a new after so long and all I had in mind was, I am asking for the cute puppy who would play.

But when you don’t make your requirements clear, God does not take anything seriously. So here is a twist that however I got the puppy who looks handsome and is a cutie pie(as he appears in the first image) but is also very very..(I can’t type the same thing more, so Imagine ) hyper active and aggressive who enjoys biting and barking and jumping on us all the time(see his angry mood in the second image).

Initially I wanted to name him “Pogo” but nobody agreed and finally they settled with “Bansi”. Bansi – means a flute. But the way he behaves the name which suits him is “Bullet” as he shoots all the time. He just love biting. I can’t teach him biting inhibitions as he bites too hard and does not listen to anything during that time. Sometimes when we stare him he gives us his typical look as if he is telling “haven’t you seen any handsome guy?”

But why he bites so much? Food, Food and Food.  He just love the food just like me. But my little giant puppy wants food all the time. He can’t tolerate any delay when food is being served. He would shake his body top to bottom and it would become hard to control him. He has zero patience. So I chain him most of the day and would free him off leash only a few time a day. I need to chain him all the night in a different room, and if I don’t he wakes me up early in the morning for his food and he won’t give me even 5 minutes to prepare his food. He chew everything but not food. It takes him just 30-50 seconds to finish his bowl. Once I tried to capture this but by the time I started recording the food was already finished :). He even dreams a lot during his sleeps and I find him shaking his body, sometimes his mouth seems chewing something in the dreams. I bet he would be running after some food.

Its 3:15 in the morning and he is sleeping in my right corner, but wakes up on my each move and if I get off my chair, he would get up and just stare me as if he wants food right now. I have to prepare his food silently to avoid his unnecessary barking. I am already bitten by him many times and now I have good number of scars on my both hands. He can’t be trained outside as trainer wants him to be at least 4 months old and he is just 2.5 months old

Is my puppy good for anything???

Last weekends I bought him some biscuits to treat him, and started giving him training on my own, and yes there is hope and he is very very very dear to me. It brought amazing results however he still bites. Now he understands “Sit” very well. His response time to food has been increased and now I don’t serve him until he sits in a manner. When treat is on hand, he follows all the commands like Go to your place, sit, come etc. Many times I don’t have to say Sit even as he already takes the positions to get the treat and he is trying to be a good boy.

Recently I introduced him to “Speak” command, now he barks a little when I give him the command, but funny part is he started barking continuously after that to get the treat as he thought it is barking which gets him treat. But before teaching him Quite command it was necessary to teach him Speak. So I am getting there. Teaching him not to bite is so far very hard as he does not react to any training methods.

Next in the list are Heel, down, leave it and drop it. He also taught me one good thing meanwhile his training sessions, that animal beings can learn anything and behave very well when food is being severed and they follows it consistently once they learn it.

And of course my puppy is good for everything and is very cute(do I have any choice? 🙂 )