I am a software tester by profession, and we testers know that testing is an art of investigation. It requires great observational and analytical skills. A tester keeps questioning to dig deeper and deeper in order to get the quality information which she can further use to learn and understand the product better, report and advocate the findings, help stakeholders to take timely decisions. Sounds a lot of brain work, isn’t it 😀

But most of the time we do this work by sitting at the desk. Mind travels at light speed but body might not have moved for hours. At mental layer one might be able to visualize and answer every what, why and how, but at a physical layer there would be a broken connection.

To work upon this phycial layer, we get into sports. Sports is not just to claim ones fitness, but it’s also to claim back our bodies with which we might have stopped talking for most stupid reasons. I started running to get over my knee phobia, 3 years after my accident. It was to conquer fear mainly. I still have that fear of falling down on my knees, but these voices are now so little I could hardly hear them, and I don’t let them takeover.

Initially I had an impression that I am running to get away from using my mind. I wanted no mental involvements or brain excersises. I wanted to run free of everything. No hunger of distance to cover, no hurry to reach the finish line. I wanted to checkout on birds, ponds, trees, and flowers (people I avoid in any case though 😉

But irony is each sport is a mental game, and after a point one can not expect to break the barriers withoout taking her mind along. After participating in many running events, I too got the sports watch, started running short distances seriously, and took cycling, gyming, yoga as a crosstraining. It felt like I was talking to my body, but now I was commanding her to obey my wishes to finish certain distance in some particular time, by strictly following “No pain No gain” phylosphy.

In the process I got injured many times. My hands got the opportunity to hold the medals and legs had to go through x-rays and MRIs a few times. I wish one day orgranzers start to make leg medals which can be worn and falunt by legs who do the real work on the field. But again injury is also a part of the game, and though you can take precautions to avoid it, you can never say when you will get trapped.

So what starts with run for fun, gradually turns into run with a strategy, have a proper nutritions planned before, during and post runs. Wear dryfits. Take B12 shots regularly specially if one is a vegitarian. You can’t run just like that. Go against traffic for your saftey and take safe roads if you are a female. I run barefoot most of the time, so at least I don’t have to tie the shoes. But still a lot to consider before you put your foot out of the house.

Despite doing running, cycling and yoga since many years, I am not yet able to built up my core strength. I did learn proper yoga recently and practicing it(Asanas) noe more often. I stopped gyming to fit yoga into my schedule. I feel happy when I am planning my workouts and finishing those self made goals gives the feelings of satisfaction. Sometimes I get angry also when family situation demands my involvement and I have to skip workouts. It feels as if my energies are getting bottled up and if it won’t get an outlet I will burst anytime. But still I feel running does not come easy to me, and by that I mean I mostly reach finish line with a lot of physical exaustion. I have witnessed many who finish races if it was totally effortless, but naturally they work their asses off to achieve this kind of level.

One funny thing I see at most races is, we ask eachother about our timings after the race is over, and not if we are okay after dragging ourselves in the hot weather for such a long period. But still marathons are the places where you will find even most selfish people act selflessly. Mostly because your brain frequencies would be in the sync with of so many others present there. When you see volunteers cheering you and helping you would be the most kindful act you can  witness. At marathons everyone is a family.

Recently I participated and finished halfiron brickathon (90km cycling + 21km running) which was one of my 2020 goals. As I was not in my good health as usual because of overtraining just for a week, I practiced less than usual. I thought undertraining would be better if I want to finish and achieve this goal. I rode cycle at slower speed than my usual, one because it was very windy and two I knew I have to run 21km afterwards and if I have to keep myself away from inury I have to take it slow. But still three times I thought it was over. Once during cycling when my right leg felt stiff, I slowed down till I felt comofortable to go. As soon as I finished cycling and started a running, my right knee felt tight as if it was getting locked. I used cold water sponges twice in each loop. 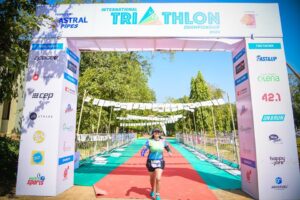 But What I did different during this race course was, I kept telling myself to go slow keeping tomorrow in mind. I wanted to be fit to run and ride for future as well. But one thing is sure that more than body now my mind is addicted to sports, and it wants its fuel like a daily meal. And when mind and so many other things are involved I am not able to get the good amount of joyful and peaceful moments which initially I used to. Mainly because it has become a planned activity and one can not plan happiness.

Fortunately I am a DogParent and Plantparent as well, and when you have so many kids who give unconditional love and peace in return of a regular meal and watering, you will get your enough does of joy and peace. In short I have learned to get same thing from other places when sports too have become a calculated and planned activity.