For me 2016 seems to be a year of travelling as I went to Goa for a vacation in the first quarter, then just last month to Himachal Pradesh to trek HamtaPass and Chandratal lake, and then explored Delhi for a day. Soon after this trip, I got to know about #STepINSUMMIT2016 and so I immediately registered for it.

I was excited to go as after two years I would be attending some testing conference and would also get to meet some old friends in Bangalore. It was almost 36 hours journey from Ahmedabad to Bangalore, so I utilised time to read some testing books.

My train got late by 2 hours and I reached my room almost after 7:30 am on 4th August.  I got ready and left the room as early as possible to reach the conference venue on time as Bangalore is also famous for it’s traffic. Somehow I managed to reach there after 9:15 am before it got started. I met Jyothi and Parimala and we exchanged hugs. Though most of the interactions with them are virtual, meeting them in person is indeed a joyful event.

What I learned from each talk:

Day1: 1st talk on “Reinvent To Disrupt by Ashok”

He talked about the transitions and technology shifts the indian IT-BPM industry has been through, some of which I had only heard of. He then went to explain how India is ahead in this sector and can benefit from these shifts. How the smartphones are becoming the integral part of how we do/see business. That reminded me that from booking my train tickets to booking an uber cab to paying for the trips, all were digital transactions. There were no exchange of papers at all. I can roam in a car just with a phone and can still finish no of things. There is a drastic difference between how my father did banking and how I do it now.  We all know that computers were invented originally to help us do calculations, but what they do today is beyond our imaginations. So such disruptions are beneficial and required

She also explained about balancing between trying to make the perfect product and Time to Market the same. What are QE’s strength and how it can be utilised in a productive manner. Talk was ended with a great thoughtful story and a lesson, which was to remember and always have in mind the “purpose of the product”

Day1: 3rd talk on “Ninja or Samurai? The art of war and the future of testing by Wolfgang”

He started with what separates Ninja from samurai, and how Ninja will takeover. He went to explain how Risk changes with the kind of product under test.

Anandi and Karthik explained how they succeeded in changing mindsets of people working on a project, by taking and introducing small steps in the right directions. They said that quality is not just tester’s job and how they made everyone realise and take responsibility of their parts in the project. Tester’s job is not limited to just find defects and how tester’s role changes and contributes at different stages. By changing the mindsets, now they are able to progress and deliver quality products and going closer to their defined goals

Then, came the technical tracks. Almost on both the days, the tracks I wanted to attend were scheduled at the same time. So I had to make difficult choices and chose what interests me more. So I had to miss Parimala’s and Ajay’s tracks. Though managed to talk few things with Pari about MicroInteractions at the lunch table.

Day1: Track 1B on “Security testing  can be your cup of Tea by Santosh Tuppad”

Security testing is something I really want to learn and explore. So naturally I got very excited when I came to know about this track happening. I really wished if the track was lasted for a few more hours. I knew Santosh from a social media only, so it was good to meet him in person this time.

He started by making us interacting with fellow participants. He then asked questions about our passwords and then told us about what information we were passing unknowingly. He went on to share his own experiences which he utilised to learn new skills and hack. He told why we give up learning and why it won’t work until it starts from within.

He later talked about the mindset of a hacker. What a hacker can learn from other person without even touching a tool. How our simple information or updates passed can be used against us. I liked the point he made about God believers and why they can’t be a good hackers. I am not a firm believer but I have a kind of good vs bad process always running in the background when it comes to ethics and specially when getting in to others business 🙂

He also suggested some tools and the importance of making learning a habit. Unfortunately it was a timed event. But I hope to learn more from him in future.

He started by explaining how he finished so many things with his smartphone by barely using it for 7 minutes. He talked on how business and services are getting changed with the shifts and how companies are eagerly adopting these changes, how release span has been reduced from months to weeks and days. He also mentioned that we would see the augmented reality happening in car navigations, and Are we ready for the associated testing challenges such innovations would bring along the way.

Day2: 2nd talk on “The Dogmatic Agile by Rahul Verma”

Rahul’s talk was very good, which touched the industry’s pain points with a needed amount of humour and sarcasm. I like the people who talk the real things and try to build the transparent environment. They are the ones who bother about the truth and want keep things straight. He pointed out on why nobody is discussing the real issues, how people are talking about only success where the stage deserves to showcase presentations on failures as well.

He used story about”a Monk and his dog” to explain what is actually happening in blindly following the industry processes. He told us not to treat agile as a process and rather treat as a culture and skill. He said that “there is always a process, but is it helping you? What has worked for others might not work for you, so there is no point in just following industry rituals. Lastly he urged to make a strong point about not to lie on the stage

Day2: Tutorial 1A on “Testing in the Extremes – an Olympics story by Brijesh Prabhakar”

It started with a quiz about olympics and later he explained how they test and manage such a large event which is used by billions of users from different part of the word. The real take away was the model, he said is working for them since past many years. They stick to it and still achieve the best. Here slides speaks a lot

This talk was presented by Sunil whom I have last met at tested conference.  I have not been into Mobile testing yet, so I chose this track to get myself introduced to it. He started by telling a parallel stories where in one how two brothers identified their market and split to sell vegetable and fruits separately to cover more consumers. In the other story he revealed that how a family get to know about something very personal, just from the kind of product emails they used to get based on their shopping patterns.

He explained the purpose of the analytics w.r.to business, social and technological aspects. How these analytics can be applied to better UX and can add value to business and testing as well. He also suggested some tools for analytics, and over a tea break, he said that they do this analytics just after release and also how they categorize the collected data.

This talk was about how technology is evolving and how machine learning can be the next big thing. I am about to explore this topic yet, but my take away from this session was the slide where he says to link problems with test cases.

I would conclude my Bangalore trip with below picture, where first two in a top row are from #stepinsummit2016, last is with my roommates Megha and Act. Last row shows the Heritage Center & Aerospace Museum, and Bannerghatta National park which I managed to visit the other day. 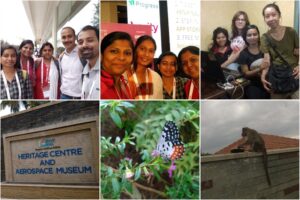